The Global Foundation for Ocean Exploration (GFOE), a non-profit group of engineers, videographers, and explorers, built the robot to support scientific research in Yellowstone Lake. Earlier this year, they successfully raised over $100,000 with public support on Kickstarter to help fund its construction. They named it “Yogi” in honor of the cartoon bear who is depicted to live in a fictional version of Yellowstone Park. 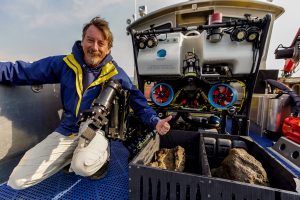 Electrical engineer and ROV pilot Dave Wright gives a thumbs up to rock samples he collected with ROV Yogi at the bottom of Yellowstone Lake. Credit: Daniel R. Rogers, GFOE

In August, the GFOE team spent three weeks exploring Yellowstone Lake with a group of researchers seeking to understand how earthquakes, volcanic processes, and climate affect the hydrothermal systems beneath it. Much of Yellowstone Park lies within the Yellowstone Caldera and is riddled with boiling mud pots, hot springs, and geysers that are indicators of the extreme volcanic processes happening below the surface. This kind of activity is prevalent at the bottom of the lake, but it is a difficult ecosystem for scientists to access as it measures up to 400 feet deep. 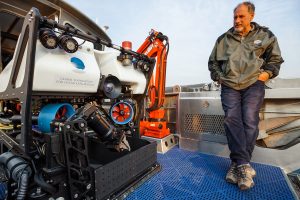 GFOE President and Founder Dave Lovalvo stands next to ROV Yogi on the deck of the R/V Annie. Credit: Daniel R. Rogers, GFOE

“Yogi provides scientists and the Park with unprecedented opportunities to study Yellowstone Lake,” said GFOE President Dave Lovalvo. “With its high-definition video cameras and modern sampling capabilities, we can now assist researchers in collecting information about this unique environment that, in the past, has been very difficult to get to.”

Lovalvo has been exploring the oceans and large lakes of the world with underwater robots for over 30 years. In 1985, he had the opportunity to bring the first robotic technology into Yellowstone Lake to study hydrothermal activity at depths greater than what was possible with standard diving techniques. “There are hydrothermal vents in the lake that host unique microscopic organisms that could have beneficial applications to human health,” said Lovalvo. “Scientists think that because some of these organisms live in temperatures comparable to those inside the human body, studying their physiological processes could lead to more effective treatments for cancer and other diseases. There is a lot left to learn.” 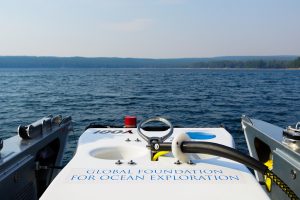 ROV Yogi looks out at Yellowstone Lake from the deck of R/V Annie just before a dive to the bottom of the Lake. Credit: Daniel R. Rogers, GFOE

“Yogi” was built using scaled-down versions of technology that GFOE engineers have developed to explore the deep ocean. Through a partnership with NOAA’s Office of Ocean Exploration and Research, they also build and operate robots capable of exploring the bottom of the ocean at depths of up to 3.7 miles. GFOE’s work was recently credited with informing President Obama’s decision to expand the Papahānaumokuākea Marine National Monument into the world’s largest marine protected area, as well as create the first marine protected area in the Atlantic, the Northeast Canyons and Seamounts Marine National Monument.