On September 15th, President Obama announced the formation of the first National Monument in the Atlantic Ocean.  The Atlantic announcement comes on the heels of the President’s declaration to expand the world’s largest Marine Protected Area off the shores of Hawaii to four times its current size. 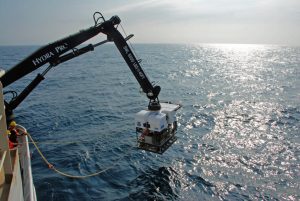 ROV Deep Discoverer (D2), is deployed off of the Okeanos. Credit: NOAA OER

Unique underwater robots play an important role in helping support these types of important decisions. The Global Foundation for Ocean Exploration (GFOE), a Connecticut-based not-for-profit organization, has been able to contribute to the discovery and documentation of what makes these areas some of the most valuable underwater resources on Earth.  Working under a grant from NOAA’s Office of Ocean Exploration and Research (OER), GFOE designs, builds and operates high-tech underwater robots that gather data and high-definition images from areas as deep as 20,000 feet below the surface.  Working together with numerous partners onboard the NOAA ship Okeanos Explorer, the Foundation paints part of the picture that helps scientists and lawmakers decide what the country needs to set aside and protect.

Dave Lovalvo, President and spokesman for the Foundation, believes that this opportunity provides tremendous parallels.  “Marine Protected Areas are the ocean equivalent of our National Parks,” Lovalvo said.  “It was the spectacular images and artistry taken by explorers that first influenced the designation of these parks.” The Foundation, through its partnership with NOAA, provides stunning underwater images that help to understand the value of our ocean environment. “We are engineers and explorers who provide scientists and the public the ability to see what still remains largely unknown and unexplored.  Understanding and documenting the deep ocean is our mission,” said Lovalvo. “It is a great day when our efforts lead to the protection of a valuable resource.”

The new Northeast Canyon and Seamount National Monument is about 200 miles off the coast of Cape Cod, Massachusetts. It covers just under 5,000 square miles, which is about the size of the state of Connecticut.

The link below shows video gathered at this new protected area along with the President’s announcement.