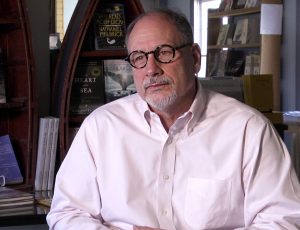 Dave Lovalvo has been working in the fields of ocean science and exploration for over 40 years, documenting and supporting underwater research projects in just about every major ocean and many of the world’s major inland lakes. He has spent 28 years exploring, filming and mapping Yellowstone Lake, and continues to support projects in Yellowstone and many other locations around the world. He has been an engineering consultant to Woods Hole Oceanographic Institution, where he was certified by the Navy to pilot the National Deep Submergence manned submersible Alvin.  He was a member of the original design team for the National Deep Submergence Remotely Operated Vehicles “Jason,” as well as Dr. Robert Ballard’s exploration vehicle Hercules.

He has explored and documented some of the most exciting underwater thermal features in the world, including areas of the Mid-Atlantic Ridge, Nine Degrees North, the Juan De Fuca Ridge, Lost City, the Coral Triangle of Indonesia, the Galapagos and Mid Cayman Rise. He was part of a team who built and installed HydroLab, one of the first underwater habitats for science and was one of the chief pilots on expeditions to film the RMS Titanic and locate John F. Kennedy’s PT109 in the Solomon Islands.

He is a published author and co-author of over 20 scientific papers and articles, and currently splits his time between Connecticut and southwestern Montana.