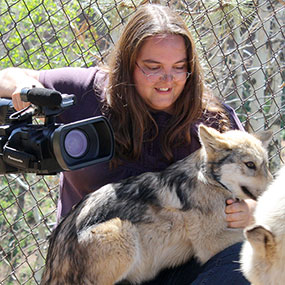 Annie White is an award-winning documentary filmmaker, photographer, and biologist who specializes in conservation biology and animal behavior. She holds a B.A. in Environmental, Population and Organismic Biology from the University of Colorado and is currently finishing an MFA degree in Science and Natural History Filmmaking at Montana State University.
Her career has taken her from collecting limestone samples and fossils in Wyoming, to studying wild wolf behavior, to filming cougars and grizzly bears. The years she spent living and traveling with captive ambassador wolves kickstarted her interest in science education and inspired her to reach out to larger audiences through film.