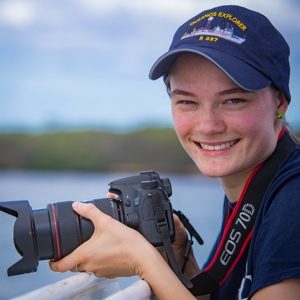 To prepare for attending film school, she pursued a number of internships, spending three months learning to use editing software at NOAA’s Ocean Media Center, one month filming wolves with Landis Wildlife films in Yellowstone National Park and making several more trips working side by side with industry professionals on the NOAA ship Okeanos Explorer. In between her classes, Tara continues to participate in expeditions with the Okeanos and produces films for the OER website. She has worked on a variety of films as a producer, camera, sound, and editor. She hopes to use film to share her voice and as a platform for conservation. When not at sea, she resides in Portland, OR where she rides horses, tango dances, and SCUBA dives.